During the day trip you will get acquainted with the historical heritage of the city of Daugavpils, visit the Dinaburg fortress, observe the temples of different congregations on the Church hill and taste the real Latgalian shmakovka. 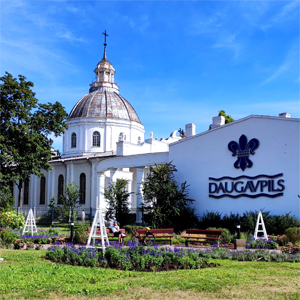 Daugavpils is the second largest city in Latvia and the largest city in one of the historical and cultural regions of Latvia – Latgale. The city has played an important role due to its location on the frontier throughout its history. Representatives of different nationalities and religions coexisted peacefully here, which can be evidenced today by the rich cultural and historical heritage of the city.

We will start our acquaintance with Daugavpils with a visit to the Dinaburg fortress – the only fortress from the first half of the 19th century in Eastern Europe, which has preserved almost in its original form. The fortress is the most significant cultural and historical monument of Daugavpils and one of its symbols.

After visiting the fortress, you can take a lunch break.

Next, we will go to the center of the city of Daugavpils to get acquainted with its main sights during a walking tour.

After the walking tour, you will get acquainted with a peculiar brand of the Latgale region, a strong alcoholic drink – shmakovka. You will learn about the traditions of making and drinking shmakovka in the largest and most modern museum dedicated to this drink.

The walking tour in Daugavpils can be complemented with a visit to the Mark Rothko Art Centre – the only place in Eastern Europe where you can get acquainted with the original works of the world-famous artist, the founder of abstract impressionism Mark Rothko.