During the trip you will visit the "Pearl of the Baltic" – the palace and park of Rundale, enjoy the silence and idyll in the Mežotne Palace, and also see the sights of Jelgava, the former capital of the Duchy of Courland. 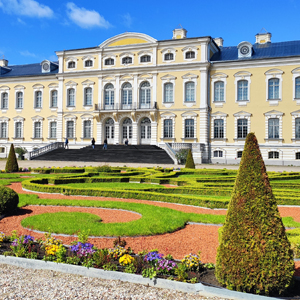 Rundale is the place where the “Courland Versailles” was built in the 18th century – the summer residence of Dukes of Courland. The author of the project of this grandiose palace complex was the court architect of Russian imperial court – Francesco Bartolomeo Rastrelli, however the requestor of it was Ernst Johann Biron – the allmighty favorite of the Russian Empress Anna Ioannovna.

During the excursion in the palace, you will see the interiors with the original decoration of the 18th century, hear the history of the construction of the palace and no less entertaining history of its restoration, which lasted more than 40 years, and learn a lot of interesting facts about palace’s owners and their fates.

After visiting the interiors of the palace, you will get familiarized with the palace park and all the characteristic elements of gardenы of the Baroque era – ornamental parterre, bosquets, alleys, pavilions, pergolas, amphitheater, and labyrinth. The park is proud of its collection of roses – more than 2200 varieties that bloom throughout the summer and make up the largest collection of roses in the Baltics.

Next, we will stop by the palace in Mežotne, which was presented by the Russian Empress Catherine II to the governess of the royal grandchildren Charlotte von Lieven. The palace was built according to the project of the no less famous architect from Saint-Petersburg – Giacomo Quarenghi. Today Mežotne Palace is an excellent example of the classicism style in Latvia.

Continuing the excursion day, we will go to the former capital of the Duchy of Courland – Mitava, nowadays called Jelgava, where we will get acquainted with another creation of F. B. Rastrelli – the Jelgava Palace. Unfortunately, the interiors of the palace were completely destroyed during the WWII, but even outwardly, the palace is impressive. In addition to the palace, you will also see the building of Academia Petrina and the Cathedral of Simeon and Anna, which is considered as the last project of F. B. Rastrelli.

The day trip to Rundale can be supplemented with a visit to the museum exposition "From Gothic to Art Nouveau" located in the Rundale Palace, which tells about the main vectors of development of Western European styles. All historical styles that have become widespread in the territory of Latvia are presented in 15 rooms, thus allow tracing of stylistic changes in ornaments, decors, forms and functionality of objects.

During the summer season, the day trip to Rundale can be supplemented with a visit to the Duke's tomb in the Jelgava Palace.

The excursion program can be supplemented by acquaintance with the small but cozy town of Bauska, the historical center of which is an excellent example of Renaissance urban development. The main sight of Bauska is the Castle of Bauska, which is located in very picturesque spot – at the confluence of two rivers. Once this castle served as the residence of Dukes of Courland, but nowadays you can visit a historical exhibition and restored ducal apartments in the castle.