During the day trip you will get acquainted with the historical heritage of the port city of Liepaja, visit the once closed territory – Karosta, and also take a promenade along the Liepaja beach, which is famous for its fine white sand. 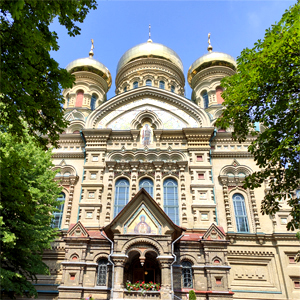 We will start our acquaintance with Liepaja with a visit to the former military port – Karosta. We will see the architecture of the times of Tsarist Russia, admire the majestic Orthodox Naval Cathedral of St. Nicholas, see the Northern forts and take a part in an excursion to the only garrison prison in Europe which is open to tourists.

After the excursion, you can take a lunch break.

Next, we will go to the city center of Liepaja to get acquainted with its main sights during a walking tour.

Then we will make a stroll along the Seaside park and the wide Blue Flag beach, which is the pride of Liepaja.

The walking tour in Liepaja can be complemented with a visit to the Holy Trinity Cathedral, hosting the largest original mechanical musical organ in the world.